Engineers and scientists from Stellenbosch University have developed a visualisation tool that can automatically localise and quantify specific cellular processes such as mitochondrial fission and fusion – and that in three-dimensional space and time.

Mitochondria are organelles that generate most of the chemical energy needed to power the cell’s biochemical reactions. Mitochondrial processes, such as fission and fusion, therefore play a central role in the balance, function and viability of cells. When things go wrong, it is often a sign of the onset of neurodegenerative diseases such as Parkinson’s and Alzheimer’s disease.

To date, however, the accurate quantification of these cell dynamics has been a challenge, with most of the work being done manually.

Prof Ben Loos, a physiologist in the Department of Physiological Sciences, says they are very excited about this work: “We believe it moves the field forward on many fronts, from life sciences dealing with mitochondria and microscopy, to the fields of image analysis and object recognition, computation and machine learning, data handling and analysis, and 3D visualisation.

Since 2015, he has been working with Prof Thomas Niesler from the Department of Electronic and Electrical Engineering on improving 3D visualisation tools associated with microscopy. The current tool, called the Mitochondrial Event Localiser (MEL), was developed by Dr Rensu Theart as part of his PhD research into the virtual reality visualisation and analysis of microscopy data.

Prof Loos says image analysis of biological data is often so time consuming that only few research groups embrace such a task: “With MEL, we are able to quantify the structures and the interaction (fission and fusion) between the structures in the cell, as well as pin-pointing where these are occurring.

“This is incredibly exciting, to locate where in the cell fission, fusion and depolarisation occurs, and to quantitatively describe their magnitude of occurrence”.

Why is this so important?

“This really bothered us. Especially since this plays such an important role in neurodegenerative disease, we wished to come up with a tool that could describe the mitochondrial network dynamically, meaning to work with real-time data sets. In doing so, a completely new data set is generated, which allows to showcase the state of equilibrium of mitochondria between a fission and a fusion state.”

They believe this software tool will be of major benefit to the research community dealing with mitochondrial dysfunction. Especially those laboratories focussing on Alzheimer’s disease and Parkinson’s disease.

“It could also become part of a diagnostic tool, if integrated into so called high throughput imaging platforms. And because mitochondrial depolarisation is a critical part in the beginning of cell death, there may be an even wider application base,” he concludes.

Information box: How does MEL work?

The article “Mitochondrial event localiser (MEL) to quantitatively described fission, fusion and depolarisation in the three dimensional space” was published in the journal Plos One recently and is available online at https://doi.org/10.1371/journal.pone.0229634

The code that implements MEL is available for download at https://github.com/rensutheart/MEL 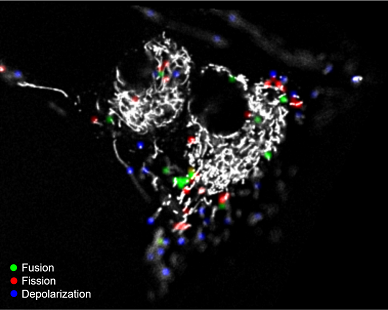 This is the result produced by the Mitochondrial Event Localiser (MEL) when applied to an image showing only the mitochondrial network of a cell acquired by confocal microscopy. The different colours indicate the location of where the mitochondrial fission, fusion, and depolarisation events were detected. Image: Rensu Theart

This website uses cookies to improve your experience while you navigate through the website. Out of these, the cookies that are categorized as necessary are stored on your browser as they are essential for the working of basic functionalities of the website. We also use third-party cookies that help us analyze and understand how you use this website. These cookies will be stored in your browser only with your consent. You also have the option to opt-out of these cookies. But opting out of some of these cookies may affect your browsing experience.
Necessary Always Enabled
Necessary cookies are absolutely essential for the website to function properly. This category only includes cookies that ensures basic functionalities and security features of the website. These cookies do not store any personal information.
Non-necessary
Any cookies that may not be particularly necessary for the website to function and is used specifically to collect user personal data via analytics, ads, other embedded contents are termed as non-necessary cookies. It is mandatory to procure user consent prior to running these cookies on your website.
SAVE & ACCEPT